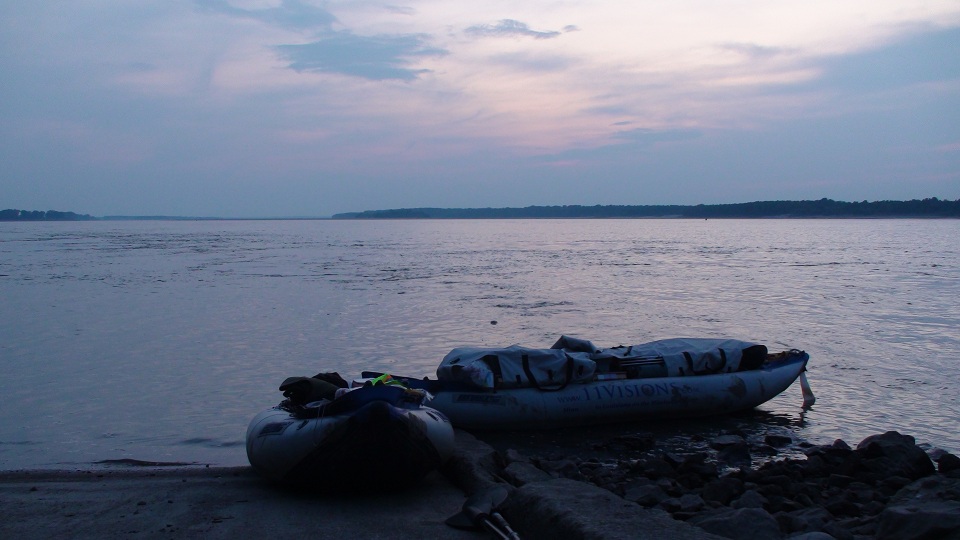 We’re finally at Memphis, Tennessee! The next big city on the map. I can’t see it from here, but I know it’s just a few miles farther down the river–37 miles farther to be exact. Ryan and I are waiting on a boat ramp for my friend Wes to come pick us up where his family will host us for the night. This particular ramp seems to be a popular party spot in the rural town of Ripley, Tennessee. About every 10-15 minutes a vehicle will drive down the dirt road to the top of the ramp and begin driving slowly down until they see us sitting there. Then the vehicle stops and backs up to the road and leaves. There seems to be a lot of confusion as to the new party spot as dozens of vehicles continue to check the ramp as the moon rises. I used to live in Prim, Arkansas and a similar ritual occurred each weekend as the local party-goers would settle on a location to drink that night. I’m not sure why, but the Prim folks were somehow more effective in their selection process. Everyone somehow ends up at the same spot without a whole lot of confusion.

Another Ripley partier who still hadn’t received word that two strange paddlers were sitting down at the dock drove up to the boat ramp with Kid Rock music blaring. Instead of turning around and driving away, the young man walked…I mean staggered down toward us on the ramp. “How are ya’ll?” he asked loudly. Without waiting for an answer he introduced himself and shook my hand pausing longer than necessary to grasp it as though he wasn’t sure what to say next. “Cracker” as the drunk girl in the truck addressed him gave us his phone number and said to call if we needed anything. Ryan asked for a beer and “Cracker” reiterated that we could call him if we needed anything. Apparently a beer didn’t count. “Cracker” told us he had vodka in the truck, but that seemed like a bad idea considering what it had apparently done to him. Their headlights turned back down the road and we were again left in darkness.

The fire I had built before sunset kept dying down due to a lack of substantial wood. There is plenty of driftwood pieces lying on the shore which burn well for about 5 minutes and then disappear into ash. I used the light from an oncoming barge to pick up more wood to build up the fire again. We’ve been on shore for about 5 hours now waiting on Wes. The lastest news is that his brother Riley will be driving out to get us. Apparently the 37 miles cannot be driven quickly due to there being no direct roads so it will take then an hour and a half to arrive assuming no wrong turns are made. I call Riley a few minutes after midnight to see if he is close yet, and yup, they had gotten lost on the rural, nearly unmarked back roads. I waited beside the road for them and Ryan and his girlfriend Lindsey arrived about 12:40 am. On to Memphis! Maybe there will be a party there?