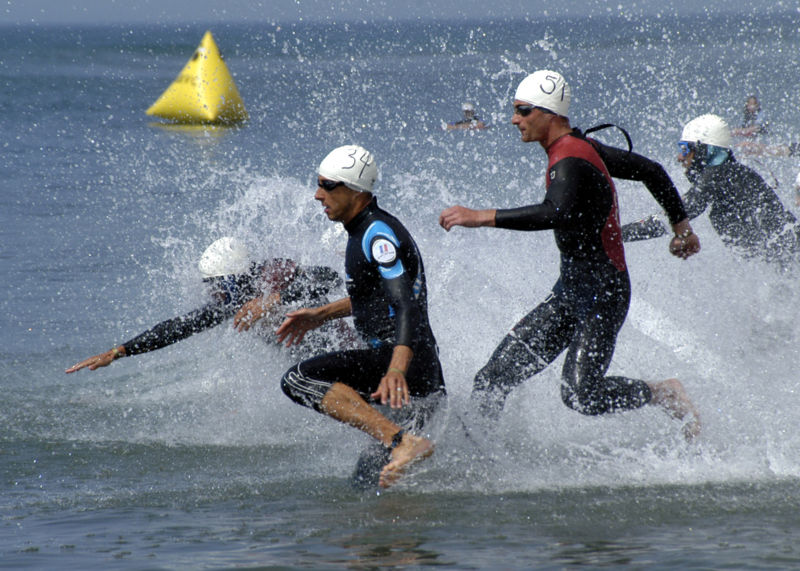 Answers to your questions:

No, I am not pissing in my pants.  I’m gonna do that in the water.  BTW, I finally found out, in one of my Channel Swimmer interviews, what you do when you’re in the water and have to take a dump.  That’s go # 2 for all you sissies out there.  You pull down your Speedo and let ’em rip.  Dookieeeee!!! Cadyshack reference #1.

Here’s what I’d like you guys to do for me while I’m swimming.  Pray for me!  Hold positive thoughts.  Surround this swim, which will take place Sunday morning at 8:45 Pacific, with positive, positive energy.

I already got one girl on board for this.  She’s a former English Channel relay swimmer.  Check out Karen Drucker’s website for some positive inspiration.

So, recap:  I’ll be in the water around the island of Alcatraz at 8:45 am on Sunday.  Your job is to surround me with positive energy.

But, Ryan, how do I do that?  Any way you want!  Some people imagine a band of positive white light surrounding someone, me, in this case.  Some people think things like:  Ryan swims efficiently, elegantly and with great ease and enjoyment.  He finishes the “race” in under 45 minutes. Some people open up a bag of popcorn and munch the cosmic forces of the Universe into motion.  Some people will be asleep, so say your prayers for me before you hit the sack.

In the Meantime and for Your Enjoyment…

I’d like you to take a look at a snippet from a future post.  This is partial account of my experience with the South End Rowing Club, the oldest rowing/swimming club in San Francisco.  A lot of this is entertaining and it’ll give you an idea of the kind of people I’ve been hanging out with since I got here.  Enjoy.

It’s old, very old.  The coverings on the walls are photos of long-dead men with mustached faces spying at the camera.  They were the rowers of San Francisco’s South End Rowing Club (SERC).  They must have had to have sat there for four hours, Abraham-Lincoln style, as a washed-up man with a comb over and a 70s (1870s) camera shot them as they flexed their muscles gripping antique oars and trying to seem that much more sexually attractive before the flashbulb popped. I’ll never be in this shape again, Mr. Twirled Walrus Mustache says as I stare into the black and white photo, for he is now worm food.  But before I am worm food, I film him and the current members of San Francisco’s oldest swimming and rowing club.  (Video to be posted when I get back from San Fran.)

Not to channel Dead Poets Society, but as I looked at these old black and whites, I did hear a faint “gaaaaather ye rosebuds while ye maaayyyyy” permeating from their lips.  Spooky.  Will my photo be on the wall one day for a 2100er?  I moved on.

Today, the South End Rowing Club has more swimmers than rowers.  They have a handball court, two of them, and the atmosphere is decidedly male.  In the seventies (1970s), they and other clubs were forced to admit women, but the air of braggadocio remains.  I sniff it in and love it.

Dan McLaughlin, Head of the Boat House, turns to me:  “See that guy up there?”  It’s a picture of a bald-headed insaneasoid.  He looks like George “the Animal” Steele on crack.  “They called him the Masked Marauder.”  He is menacing.  He looks like he could rip my head off.  “He could rip your head off,” Dan says.

Former wrestlers, handball players with their shirts off posing for a 1950s camera, 80s mustached (maybe mustaches are an 80s thing in any century),

men in Speedos now with arms around welcomed women, more photos, and more history surround the boathouse.  I walk it as 2000s men and women hack and saw away at an old rowboat they called “The Barge.”

The Barge, also known as The South Ender, is fat.  Perfect craftsmanship wraps it in bolts and long shiny wood.  “We’re gonna get in this thing and kick the Dolphin Club’s ass” Dan says as he and five others work to make it seaworthy for their upcoming race against their rival rowing club – The Dolphin Club. The two rowing and swimming clubs sit side by side not far from San Fran’s Fisherman’s Wharf.  The Dolphin Club, bathed in Democrat blue paint, and the SERC in Republican red (don’t worry, everyone’s still a Democrat) don’t hate eachother; they just kinda… well, okay, they kinda hate eahother.  “It’s all for bragging rights,” Dan continues.  “There all so uptight over there,” another member chimes in.  “I’d like to go talk to them,” I say.  Dan’s face looks sour.  “We eat dinner promptly at 8,” which I took to mean I can’t believe you’re going to talk to those assholes.

It is dinnertime. Sarah, a young woman with a limp I am too afraid to ask about, prepares the meal.  “I want to swim the English Channel but I don’t think I have it in me,” she says.  “Yes you do,” I say.  A plaque on the wall lists all the members of the SERC who have swum the channel with their times.  Like I said, bragging rights.  “If you want to, you can.” I tell her.  “Meatloaf!  Who wants some!” she yells, and five men and one woman leave their work lights and buzz saws on top of the Barge and head into the mess hall.

“I’ve got vegetarian and turkey,” Sarah shouts.  The meatloaf is good, the vegetableloaf is good too.  I am filled with warmness.  It felt good to eat after my first real swim in the bay in preparation for my Alcatraz Swim on Sunday.  (Please feel free to comment on this post to cheer me on.  I’d enjoy tremendously your support.)

The SERC and the Dolphin Club are right on the ocean overlooking San Francisco’s Aquatic Park a giant concrete circle with a small opening that’s supposed to break the bay’s more dangerous waves, but when I went out to swim it four hours earlier, some of those babies were capping.

We come into shore and I almost run into the dock.  “Oooooh, I was doing good there, tearin’ it up, and then I almost run into the dock.  I have to remember to sight for Alcatraz.”  Michael Phelps, though he be the fastest swimmer in the world, need not worry about where he’s going in the water.  A thick black line fills the bottom of his goggle vision.  In the open water, the black line… well, what black line…..

More to come when I get back from San Francisco.  Take care and good luck.