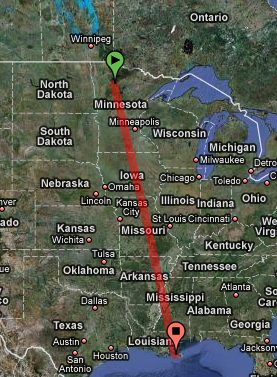 Phil and Ryan of 11 Visions are about to depart on their Mississippi River Adventure, but first, some comments from the peanut gallery.

OK.  Some smart guy has said that we’re not really going 2500 miles.  His line of reasoning is the following…

All true.  We are total frauds and just wanted to get your panties in a bunch so you’d think we’re cool.

As Borat would say, “NAAAAAAT!”

It is roughly 1300 miles if you are a croowwwwwwww…

But if you are a land-based mammal, or if you just really like mammary glands, you’re not going to be able to fly over the river.  Since we have opted to float, going where the river takes us is going to be the name of the game, and (when all is said and done) we will have paddled over 2500 miles.  OK, Mr. Doubty McDoubtypants?

There will be times on the river where we’ll be traveling due east or west.  Check out this portion just west of the Quad Cities.

And finalment there will be times when this bad boy is going due north.  It does so at New Orleans.  I think it’d be a pretty amazing feat even if we were going “only” 1300 miles; but alas, I guess anything under 1500 miles just doesn’t impress the MTV generation.  I’m still trying to figure out if I’m in Gen X or Y.  Is there one in between?  Okay, this trip will only be impressive for the Y Griega Generation.  Fair enough?