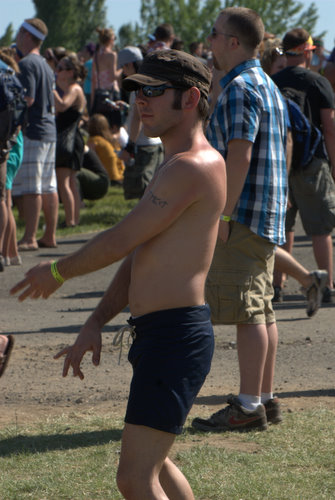 Stop laughing and hear me out.

At first the guy is dancing saying, “C’mon.  C’mon!” and you can feel the people going, “Dork.  Look at this guy.”  But then he just keeps at it, and then the green guy comes in, then the fat dude, then three more people, three more, and the breaking point hits.  Suddenly it becomes okay to dance (as if it wasn’t okay if someone just danced alone).  It becomes exponential at that point; more and more and more people keep piling in until finally… you’ve got a dance party!

I just wrote a post on the Mississippi that comments on how a great and might river starts as a trickle at a little-known lake in central Minnesota.  This principle can be applied to anything:  dance parties, rivers, multi-level marketing schemes (Notice how the only people making money started at the top?), businesses of any kind, popularity of musicians and actors – they all build.  They all start as something small and grow into something large.  So, the dude who started the dance party had to have some balls, he had to take a risk.  I don’t know how long he endured out there before the green dude came in, but in this video he seems to be working a long time with nothing seemingly happening.

What balls.  I mean several in the news media have commented on the balls it took, but what about the faith and the persistence?  I think there are a few principles at work here:

As we already mentioned, something large starts as something small:  A tree was an acorn, a river was a stream, an adult was a child.

Persistence.  Even though he had an image in his mind of a whole bunch of people following him to the promised land, they, uh, weren’t.  In fact they were just staring at him for a loooooooong time.  The dude didn’t lose…

He kept at it because he had faith.  He knew that in a matter of time, people would join in, and that he’d be all over YouTube and the hero of millions……  Okay maybe not.  I think he did have faith, but it is possible that he didn’t know anyone, for that matter, would join in.  I’m sure he had no idea he’d be an internet sensation.  But he had the final thing that has to keep you warm during the cold winter of no one giving a shit about what you’re doing:  Love.

I think this guy was dancing for the love.  I’m sure he would have loved for a bunch of people to join in and validate what he was doing.  In one video I watched he’s inciting people to join him, but he quickly goes back to just dancing.  You’ve got to have that…

Detachment allows you to enjoy your love.  It says, “Yes I do want people to be interested in what I’m doing, but it’s okay if they don’t.  It sure would help if people were interested in my MLM business, but I just need to be persistent.  And what will get me through the dark times is my love; I’m doing this because I love it.  If, by some set of strange events, I never get one sale, I never make it to the Gulf of Mexico, I never win that dance competition, get my degree, get my Ph.D., get a perfect girlfriend, swim the English Channel, find true love, feel a direct and spiritual connection to God, then that’s okay… because I love the journey.

So while we love this journey, not just our journey down the Mississippi River, but our journey as a business, it sure is nice as more and more of you join in the dance party.

2 thoughts on “Sasquatch Dance Video is a Metaphor for Nature”