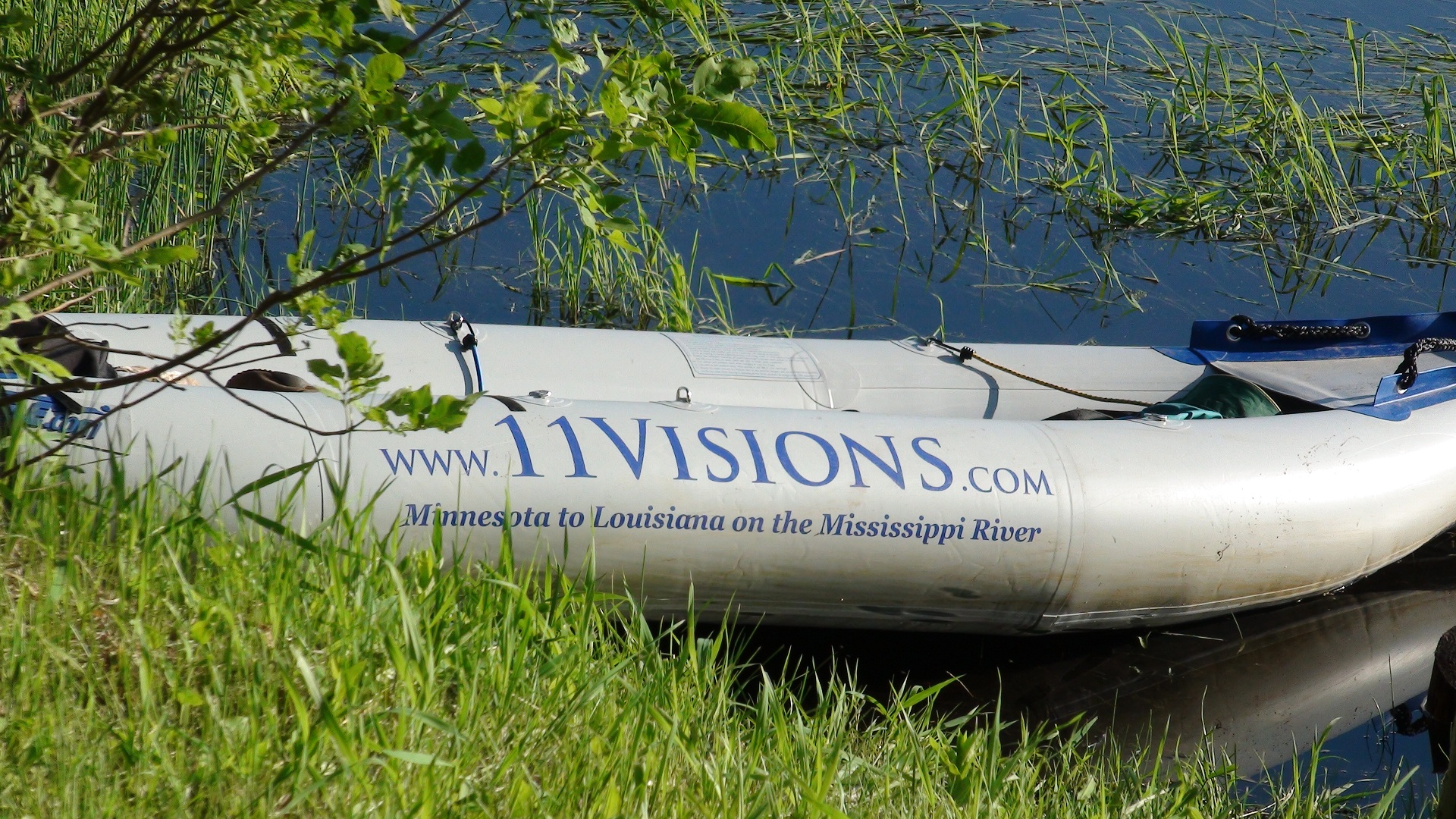 “I think it’s back here in this corner,” Phillip says.

He’s wrong.  It’s not back in that corner.  It’s not in any corner.  We’ve been paddling through the night.  Lake Bemidji was hard.  A young and amiable man offered us to ride his Sea Doos.  I declined but asked him to please tell me where Lake Bemidji emptied into the Mississippi.

“Just right between those two tree lines,” he assured me.  He was wrong. “The exact spot!” I assured Phil.  “This is the exact spot he said.”  Phil was annoyed.  We were nowhere near where we were supposed to be.  3-foot reeds stuck out of the lake.  They were blocking our path and making paddling unbearable.  I was mad, really mad, and cussing uncontrolably.  “G-damn, mother f—ing, sonofa fag-humping…  I asked this guy three times where this place was, and he told me right there between the two tree lines!”  Between the two tree lines was only the backyard of a Podunk McMansion.

Phil pulled out the GPS and told me our exit must be further north.  He tried to calm me down:  “Look Ryan, some people actually don’t know their own hometown very well.  He actually knows where the Mississippi River continues on, but he’s probably not had to explain it to two paddlers before…”

“And besides he let me ride his Sea Doo!”

We paddled through the reeds.  The sun was nearly gone; that meant it was 10 o’clock.  Darkness, reeds, thick lily pads for thick frogs we couldn’t see but could hear.  And finally, after intense effort, we find where the Mississippi continues on and leaves Bemidji.  Another lake.

“It’s just around this bend,” Phil says.  He’s trying to appease me.  He knows I’m mad and is too tired to deal with mad Ryan.

A few miles farther.  A few thousand paddle strokes more.  The wind picks up.  It is cold.  More mansions.  More soft yellow light escaping from their back windows.  They don’t even know I’m here, I think, I’m a murderer in the night and you don’t even know it, I think.  What the hell, I’ve got to stop this.  Yes, but why?  No one knows I’m here.  I’m cold, I’m wet.  I’m a Navy SEAL planning my mission, paddling clandestinely in the night.  No one knows I’m here.  Fish now plopping about.  They’re beautiful even though I can’t see them; they sound beautiful.

“This is where the campsite should be!” Phillip screams as loud as one can at one in the morning, over a substance that carries sound as well as Cher carries plastic on her face.  Stump Lake is a tiny lake, but it’s big enough to let a good size breeze roll over the tops of our wet shirts.  I’m chilled to the bone.  Phil looks mad.  He can’t see the shore well and is sure that the campsite is somewhere in the area.  “Take out my headlamp,” I tell him.  He laughs.  “Why, because you want me to look like a douchebag?”  He had made fun of me for it before.  My mom had insisted on me getting it.  It is a goofy looking headlamp with a long extending rod that comes straight out of your forehead.  Craig Ferguson had given a monologue a month earlier where he claimed that “while cell phones do not cause cancer, what they do cause is Douchebag Earlobe.”

So the running joke was that my headlamp caused Douchebag Forehead.  “Put it on, goddammit, and find the shore.”  I was mad, I wanted to sleep; it was 1:15.  He put it on and lo and behold my douchebag headlamp was great for spotting things in the night at long distances.  Thanks, Mom.  But still, no campsite.  Burning, burning anger.

“I swear to f—ing God it should be right here!”  Phil pointed to the map and turned it back to me so I could see.  He could see I was irritated.  His eyes said, Look man, I don’t know what else you want me to do, this map says it should be right here in this corner of Stump Lake.  I looked at the map; he was right.  It should be right where we were, floating in the night, bobbing like corks, being eaten by mosquitoes, angry, angry as hell.  “I know it should,” I told him.  I knew it was not his navigating that got us in this predicament and I wanted him to know it.  “Let’s keep paddling; maybe it’s further down.”

“Maybe the map is wrong.”

“No way, DNR would never do that.”

“Maybe we went past it.”

The ground is cold.  I don’t put down my inflatable camp bed, and that is a big mistake.  The temperature drops 10 degrees, and the ground gets colder and colder.  Waves are plopping our boats against the bank.  I’m mad, I’m cold, I sleep, I awake.  It’s…

We’re up.  “I wanna get the fuck out of here,” I tell Phillip.  He’s still asleep, stiff from the night before – 12 hours of paddling.  “I can’t move,” he says.  I don’t respond.  Cold has filled my lungs, cold has filled my skin and my hair.  I breathe in and cold is still in my throat.  I slept maybe three hours.  “Please Phil, do your best, I gotta get out of here.”

“I love that campsite,” a young girl of 27 or so tells us 30 minutes later.  We have stopped to use someone’s phone.  A smart and funny man named Bill who just moved to the area from Michigan is serving coffee chipper.  His daughter looks on as I make my call.  “In fact,” she continues, “that’s my favorite campsite.”  I want to glare at her, but she’s too nice.  “The map was wrong,” Phil says to her dryly.  She smiles.  We have coffee and doughnuts and everything is all right.  It wasn’t our fault after all; the map is not always the territory.

For those of you out of the loop, 11 Visions is paddling down the entire length of the Mississippi River for it’s next film titled The River is Life.  We want you to come along so check back in at 11visions.com to share in the adventure.  Stay tuned for our next post with 4 1/2 foot waves on the 3rd biggest lake in Minnesota (I hope my knots hold up), a random family offers us their home and then offers deer bratwurst while instructing on how to make head cheese out of a moose nose; and, the mother load, I mean the very Eden of mosquitoes is finally found.  I come bearing gifts and proclaiming I am the Mosquito Messiah.  Check back soon for more craziness.

6 thoughts on “How Not to Find a Campsite when You’re Cold, Wet, Hungry and Want to Kill Someone”