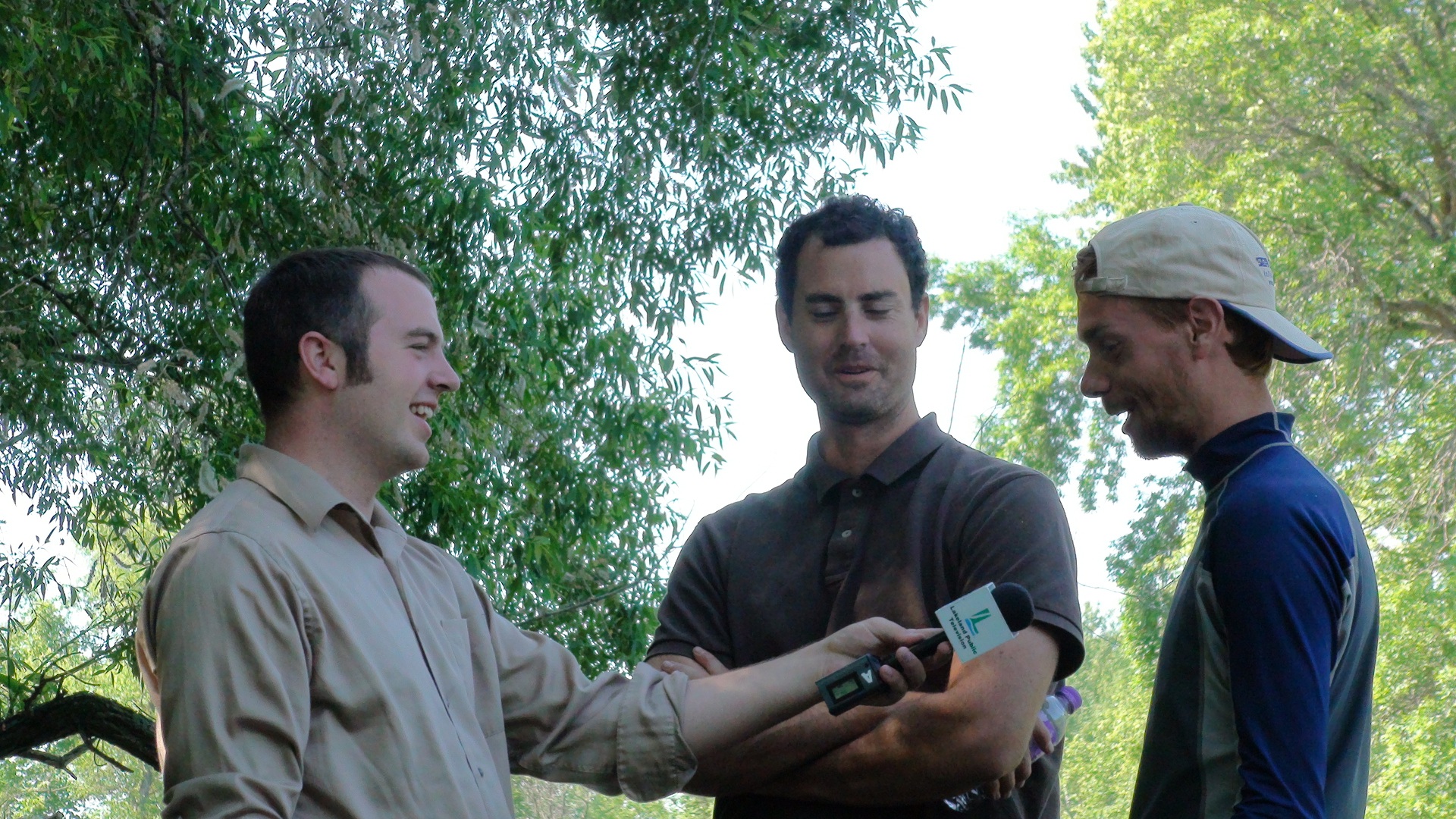 “You never know,” Phil says to me (different Phil), “you could have just paddled into a hot spot of ritual killings.”

Brian and Phil are camp leaders for a group of at-risk kids from Minneapolis’ inner city.  They smiled at me.  “Daaaaaang!” Perry, a young’n of 17 who looks like a basketball star, says.  “You paddlin’ this whole river?  Shooooot.  You gotta be crazy!”  Sidney, a young girl still growing out of her braces looks me over non-empathetically.  “What is this?” she says.  “Like rowing for God or something?”  Ha ha.  Phong wears what can only be described as a rice paddy hat (I don’t know who the woman in the video is either, but I think I’m in love.), and I instantly want it.  “Where can I get a hat like that?”  He looks up and is snickering.  “Uhhhhh, ha ha, you can get it… like in the Asian market, ha ha ha ha ha.”  His laugh is infectous.  Phong speaks Hmong with his friend in a perfectly flat-billed, white ball cap.  “He wants to know,” Phong says, “if dat boat like can go faster dan dis boat, ha ha ha ha ha.”  Phong points to a beautiful wood and nylon canoe that was built with the help of Brian, Phil, and other camp leaders Bob, Mike and Jun-Li (I know I spelt your name right this time, but I’m still such a freaking Anglo. :)).  They are the leaders of Urban Boatbuilders, a Minneapolis/St. Paul nonprofit that takes city kids and makes them into 10 times the craftsmen I could ever be before they’re old enough to drive.  Bastards.

Ed, a 16-year-old as tall as me, is forceful in his speech:  “Oh my god, that is like the coolest camera ever.”  His thoughts move a mile a minute; there is so much information bursting out of his brain that it explodes all over my face:  “Whoa.  Check it out, a plane in the sky!”  He knows exactly what type.  “That’s a DC10.  It’s flying out of St. Cloud.  That never happens.  Are those solar panels you have?  Oh my god, those are awesome.  I can tell you right now you’re getting probably 40 watts in this sunlight.  You need to paddle in one of our canoes!”  He fumbles with a GPS he has hanging around his neck.  “I clocked our boat at 9.2 mph, swear to god.  How fast does yours go?”

“Dang, it shouldn’t, we could rig a sail.  Hey Phil!”  Ed’s idea has caught wind.  So many of his great notions come through the pipe that one is bound to stick, and this one has stuck.  “Phil, come here, look at this!”  Phil is tall and good-looking.  (Dude, you know you are; don’t even front.  :))  He walks over.  He has had to deal with Ed’s exuberance before.  “Calm down, buddy.”  He puts his hand on Ed’s shoulder, and Ed looks like the stormy sea after Jesus told it to stop and be still.  “Let’s have a look,” Phil says and studies my boat carefully.  Brian joins in.  These two work in tandem often.  “No, yeaaaaaahhhhhh.”  Brian elongates his yeahs.  “Yeahhhh,” he says, “so like just sit there, and we’ll build you a sail.”

A Big, Massive ‘By The Way’

Phillip (our Phillip) is not here.  GASP!  What!  What happened?  Did he die!!! No, Phillip is not dead.  He did not quit the trip.  Phillip works full time.  We always knew there’d be a real possibility he’d have to miss part of the trip.  (OOOOOPS!  Holy crap!  I imagined that too.  That must be why it happened!)  So when Phil and I reached Brainerd, he informed me that he had to go back to work.  Bummer.  I thought we’d at least make St. Paul before he had to do that.  “Okay, man,” I said to Phil before he boared his shuttle bus bound for the airport.  “I can’t do it any other way,” he told me.  “I know,” I said.  I gave him a man hug, and he left.  It was sad for me because I had to now face the river alone.  No one to crack jokes with.  No one to yell “balls!” as loud as I can to.  No one to sing my crappy country music to.  No one.  The first couple of hours alone on the river I was extremely depressed.  No joke.  I felt alone.  Alone in the truest sense of the word.  Physically:  Nothing but trees, wind, sun, a cloud; an eagle or two was nice but they were not human.  I paddled on for a while.  Alone.  The clouds rustled in.  They were white and smoky.  An overcast shroud covered the valley.  I felt… trance-like.  I was in a vacuum, a nothingness.  I felt so horrible.  “I want my baby back,” I screamed and laughed.  Holy crap, I thought, Greg Judge was right – paddling the River together is like being married.  My spouse had left, and there was nothing I could do about it but feel alone.  Mentally and emotionally alone:  What if Phillip never comes back? I thought.  He said he’d handle his work situation and meet me in St. Louis, but what if he doesn’t?  What if the rest of the trip sucks?  When Phil’s here, it’s such a party; I mean, yeah we annoy the shit out of eachother, but that’s just cuz there’s no one else to annoy or be annoyed by.  If Mother Teresa was in this boat, I’d be annoyed to shit by her too.  Man, what if the rest of this blows?  What if this film doesn’t work?  What if… I never meet anyone cool or get to stay with anyone cool?  What if…  “WHO THE HELL IS THAT!”

In the distance I could see a boat.  It was gray, and by the high oars pumping rythmically in the water, I knew it was a kayak.  It was about a mile downriver.  What the hell? I thought.  That dude sure has a high paddle stroke. I paddled closer, faster.  Humans!!!!!  I’m so happy I’ll get to talk to… someone!  Anyone!  Shit, I’ll even talk to Barry Switzer if I have to.  I’d even talk to f—ing Sean Hannity if… okay no, I wouldn’t talk to Hannity, but pretty much anyone!  O’Reilly… maybe.

“Hey!” I said.  He turned his boat.  Holy crap!  It’s a Sea Eagle!  What are the damn chances of finding another Sea Eagle kayak on this river, or in the same spot period!  The boats are not widespread; and, if you read the comments off the Paul Walsh article, NOOOOOBODY takes an inflatable down the Mississippi!  (‘Cept for crazy morons who don’t know any better like me.)  Cool!  Another crazy moron!

“Why?” he responded coolly.  What the hell?  I’m trying to be nice to this guy.

“Um, about the Mississippi River.”

WTF! I’m getting angry but still willing to jibe.  “Yeah, so, a Sea Eagle boat.  Not many of those!”

Okay, I’m getting nowhere with this guy.  He could be high or just an asshole.  I can sense an intelligence behind all this banter, but he seems…  Yup, I conclude, he’s an asshole.  “Okay,” I say, “I gotta get going.”

What the bloody hell! I paddle on for 30 minutes… alone.  I’m mad.  My one shot at human contact is blown.  Asshole, I think, what was his problem? I pull in to make some food.  I have enough propane in my stove to make the rest of the instant potatoes.  I pull into a boat launch, fire up the Coleman single-burner and spot some fishermen.  “What’s up, guys!” I say.  “Heeeyyy there.  Goin’ fishin’?”  “No,” I say.  “Ah,” they say disappointed.  They are friendly, but this is not the human contact I am looking for.  I’m looking to hook up (not sexually, perverts) with someone.  Link minds with someone.  These guys are friendly and nice but their life, their love, and everything about them is fishing, is blue-collar beer drinking, is trashy women, is… not me.  I’m craving something else besides cordial chitchat; I need (oh jeez, I’m wading into a minefield) someone intelligent.  I turn around.  Apathetic Sea Eagle dude is behind me and closing.  Fuck him, I think.  “Hey!” he yells.  He gets out and wades through the water.  A soft rain falls, and I scramble to cover up the electronics in my boat.  “Whatcha eatin’?” he says.  Still an asshole, I think.  “Potatoes,” I say.  “Cool.  You need some protein?”

What the hell? This guy was a total jerkoff not 30 minutes ago.  He pulls out a Johnsonville Summer Sausage and tosses it to me.  “They’re 4 bucks each but they’ll keep 3 or 4 days.  It’ll go good with your potatoes.”  He’s taken his sunglasses off now.  I postulate later that he becomes a different person depending on whether he has them on or off.  Sunglasses on:  dickhead.  Sunglasses off:  giving summer sausages and Reese’s cups.  He wades a little closer to me.  “It is pretty cool you have a Sea Eagle boat.  I shopped hard for this one.”  His is an older model, beautiful and gray.  He snaps a picture of mine.  Perhaps the last 30 minutes gave him time to think about the interaction he foibled.  Perhaps he didn’t realize what it was to lose an opportunity to converse with someone, someone in a Sea Eagle, someone in the middle of this wide river on a windy day, on a day too overcast to draw out the regulars; we were the only ones out there and didn’t connect.

But perhaps Tony – whose name he gives later, sunglasses still off – just didn’t go through what I went through – losing my best friend.  “Here,” he says, “I’m gonna give you my phone number.  Put it in your phone and call me when you’re in the Cities (Twin Cities) and I’ll bring you McDonalds.”  Holy crap!  Is this the same guy? I put it in my phone.  I thank him and offer him potatoes.  “No thanks,” he says and puts his glasses on.  A tinge of the Mr. Cool he was 40 minutes earlier is back, but the interaction is complete, and we are both changed.  “You know,” I say to him, “you look like a skinny John Popper.”  “Ah!” he shouts.  “At least you said skinny!”  He flops into his boat.  His sideburns cover his face and he looks cool, but is not cool anymore… and I like him better that way.  “Take it easy,” I say.  “Maybe we’ll run into one another,” he says.  “Yeah,” I say.  “That’d be cool.”  And, it would be cool because, in spite of the shaky start, I made a friend.  I made an exchange and have fed on real life and real connection… with a real human.

Back at the Boats

Urban Boatbuilders built me a sail which I used today.  I top-ended at 7.6 miles an hour.  Normally I go about 4 and can top-end at 4.6.  I was grateful.  The world is big, and these chance meetings (whether programmed by imagination or not) are precious.  Phil, I am sorry you are not here.  I am sorry you missed the asshole, the sail, the Fruechtmanns.  But I hope we’ll meet in St. Louis.  Just remember:  Neither you nor I nor any of us… is alone.

16 thoughts on “Ritual Killing or Sail Made out of a Bed Sheet?”