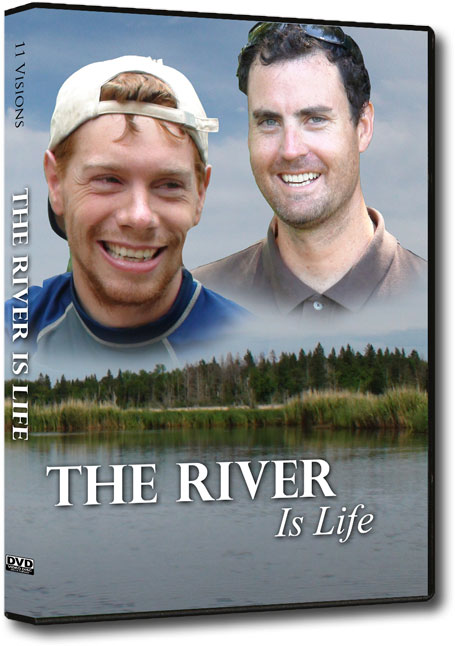 Every movie tells a story, and each story is interpreted by the person who is telling it. When Ryan and I first discussed making a movie while paddling on the Mississippi River, my mind began working behind the scenes to determine the type of movie we would create.

Sometimes we get asked about our process when making a new movie. I’ll sum it up for you. Our filmmaking style works something like this:

1. I shoot a bunch of video.
2. Ryan writes a script after reviewing the raw material.
3. I ignore the script and we fight it out while editing. Ryan wins.

The first step makes a big difference in the type of story we will ultimately create as it’s hard to illustrate your story without relevant video footage. My first idea for “The River is Life” was to focus the movie about our personal experience on the river. We’d include logistical scenes and much more of our own interactions then in our last movie. For a short while, I actually considered wiring up a microphone that would constantly record our dialog which could be later mixed with the video.

Then about a month before leaving for the Mississippi River, I watched a travel documentary called 10 Miles per Hour. Hunter Weeks’s debut into the adventure documentary world is well produced, but I personally didn’t find the logistics material to be inspiring. His movie includes tons of their pre-trip setup and behind-the-scenes type of footage. In some ways, 10MPH is more like a long “making of” bonus and less like a feature presentation. That being said, I enjoyed his film (watch it here) and learned a lot about what type of material was entertaining on-screen.

Adventure travel movies like 10MPH often have the same simple “start-obstacle-finish” plot. In our own film The Hitchhiking Movie, we have a starting point (New York), a destination (Los Angeles), and an some obstacles to overcome (one week deadline). This formula is simple to follow, but if not done correctly it tends to be fairly predictable. We hate predictable. Predictable is boring. I needed some fresh ideas for the new movie. Who else could I look up to for inspiration?

If you take the time to count up piles of torn movie tickets, Michael Moore comes out as the most successful documentary maker in America. His stories are entertaining, often wacky, and always biased. Biased isn’t bad. Our bias is our interpretation. Michael Moore’s bias sells a bunch of movies. If Michael was shooting this movie, he’d do undercover interviews at every evil corporation along the route. He’s probably selling a ton of DVDs too! Maybe 11 Visions should start pushing a political agenda? Nah……….

I then did some research online to determine if anyone else was brave (foolish?) enough to try and video their own journey down the Mississippi. I found a movie made last year by John Guider who paddled much of the river and also photographed and videoed his journey. I wasn’t able to watch his entire movie as it doesn’t seem to be available for sale anywhere, but here is a (long) trailer:

John’s story appears to focus on the reality of his journey and he pitches the Mississippi River as long, beautiful, and full of danger around every corner. At that moment, I knew exactly what our movie should focus on. We’ll do the exact opposite and show primarily the fun times!!! My interpretation of this adventure will pitch the Mississippi as the greatest river in America paddled by two guys on a mission to have a great time. Yeah, sometimes the journey is shit, but I’m cutting out all that depressing stuff. I promise that you won’t be able to tear yourself from the screen as you witness an adventure like no other. I want every viewer to say the same thing as the people we meet: “I wish I could do a trip like this!”

Although many have made the same trek, I’m pretty sure we’re the first expedition to video the entire trip from source to sea. That why it’s important that we get it right. “The River is Life” will showcase the absolute best of the Mississippi River in two hours or less…coming to our readers February 2009!

One thought on “The River is Life–Whose story is it anyways?”