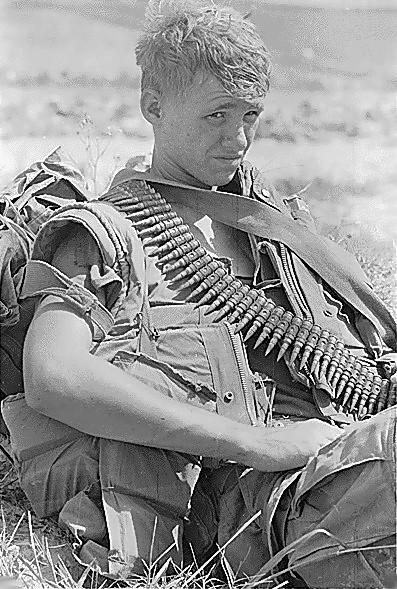 Steve Woehrle.  He’s got glasses.  His nose is large.  His ears droop down.  He sees me.  “Your dad’s over there,” he says.  No hello, no nice to see ya, no nothing.  I walk over to my dad.  He’s wearing a tie.  He looks older and I look older – I know I’m older.  Twenty-two years ago I was holding Steve’s M16 rifle.  “I brought this back from Vietnam,” he said when he handed it to me.  My dad (step-dad I’m talking about here) had to help me hold it.  Ratatattttatatatataattttttt, it boomed.  It hurt my hand and shoulder; my ears were ringing; I was smiling.  That was my only memory of Steve Woehrle, my dad’s old high-school buddy, when I went to his daughter’s wedding in Davenport, IA.

“No.  I want ice water.  I want to hear some more stories about Steve Woehrle.”

Davenport is still a blue-collar town.  It’s in its fledgling stages of becoming more cosmopolitan with a cleaned-up river front, an attempted modern art museum, and shiny new homes.  But the hulking remnants of industry hang around:  the Purina plant, coal barges with large ropes wrapped around giant, yellow hitches, and run-down dollar beer bars.  Davenport still has big shoulders.  My dad grew up in this working man’s paradise.  When he went in to talk to his high-school guidance counselor, she told him “you have three choices:  become a carpenter, mechanic, or go to Vietnam.”  Luckily he got a swimming scholarship to the University of Iowa, and his mother was smart enough to send him to the war recruitment office with X-rays of his dislocated shoulders.  No Vietnam; yes entry level sales position at Oscar Meyer.  Steve Woehrle stayed behind.  No scholarship, no prospects… yes to Vietnam.  When my dad went to college, his friends, who floated to various corners of the Quad Cities and did find jobs as plumbers, carpenters and mechanics, awaited his return.

I am in my Aunt Sue’s car now; she is taking me to the food bank in north Davenport.  She is a volunteer there; and since I will be in town for a few days, I will be a volunteer there.  She is jovial and happy to have her adventurous nephew in the car.  “You know your Dad,” she says, “paid me three bucks to clean the puke off his car after he came back from college and went to the bar with Steve Woehrle.  He actually did that three times.”  How the hell do you puke on your car three times? “Maybe Steve puked on the car,” I said.

One year Steve got tired of waiting for my dad to come home from college and decided to go see him.  He rolled up to the U Iowa dormitory, and my dad went out to meet him.  “I’m having a problem,” he told Steve.

“This guy, my Resident Advisor, is giving me a hard time.  He watches my every move, and I don’t think he’s going to let me go out tonight.  He’s going to make a big stink if I come home late.”

POW! He socked him right in the face.  Down he went.  My dad was aghast.  “Holy shit!  Whadju do that for!”

I Ain’t in Vietnam Yet, Sarge

When Steve was drafted, he knew he was going to Vietnam.  Blue collar, Iowa, no prospects, no rich father or smart mother.  When you were taken to the draft office, they loaded you on a bus.  They had a list of names of everyone that was supposed to be there.

Invariably many who were to play the the war lottery did not show up.  In the back of the bus Steve decided to say “here” for every no-show the sargeant called out.

When the bus stopped the men filed off.  The sargeant checked the number of men present with the number on his list.  “What the!” he screamed.  “Which one of you a-holes did it!”

“Smart as they come.”

Steve served two tours of duty.  He’s in front of me now, sitting next to me and my dad.  The wedding is getting extremely boring.  The DJ is playing the worst of Frank Sinatra, and the wedding party is nowhere to be found.  “I asked the limo driver,” my dad says, “where they were going.  He said, ‘On a ride.'”  “Maybe they went to smoke out,” I say.  Steve looks at me and smiles.  The thought of their recently-married daughter hot-boxing in a limosine would make most fathers cringe.  Guess not Steve.  He is angry though that they are not here.  He’s angry that he has to be the face of the party and he doesn’t like being that face.  He likes to hang in the background and cause mischief.  He gets up.  “Have you seen my daughter?” he asks an important-looking man.  “No,” he says.  Steve looks worried.  Charlie may have fired many a bullet at his head, but social situations seem to terrify him to death.  He leaves the building.  My dad turns to me.  “You know he had almost no friends when we were in high-school.  I was pretty much it.  When he went to Vietnam, he signed his life insurance policy over to me, not his parents.”  Steve’s parents were overbearing on one side and mentally vacant on the other.  My dad was his lifeline to sanity.  My step-father’s mother was the only real mother he knew.

Steve’s on My Floor

Grandma Keim (could be called my step-grandmother) was a nurse at Mercy Hospital.  Steve loved to race motorcycles.  One day he decided to take a particularly steep hill going about 70 miles an hour.  The bike escaped from under him and he put a kickstand through his calf muscle.  He broke several bones and ended up on my Grandma Keim’s floor.  “Steve’s on my floor,” Grandma said to my dad.  “He’s going to die.”  My dad ran into the hospital looking for Steve.  “Where is he!” he said.  “He’s in there,” she said.  Steve had his leg in a cast and was cursing up a storm.  “I don’t need to be in no fuckin’ hospital; Tom, get me out of here and tell your mom I’m fine, dammit!”  My dad laughed his ass off; he really though Steve was going to die.

My step-dad’s first wedding was to a woman from an extremely religious family.  Presbyterian, I think.  Steve showed up at his buddy Tom’s first wedding in jeans and a black leather jacket, riding a motorcycle.  “Where’s the beer?” he said walking into the church.

“Jesus, Steve, there’s no beer in the church!  You gotta wait till the reception!”

“Ah fuck that.”  Steve walked back to his bike and pulled out a bottle of Jack Daniels from the side compartment.

While the minister tried to sound ceremonial and sincere at the same time, Steve drank.  The Presbyterians were aghast.  Steve smiled at them and took a long swig from the bottle.  “Here’s to Tom!”

The expression “pitch a holy bitch” is common in Iowa. I don’t know what you envision, but apparently it means to throw an extremely heated temper tantrum.  Steve’s daughter and the wedding party have arrived.  I’m too far away to smell weed.  Steve stops worrying about his daughter, about being the face, and becomes interested in my story.  The music has changed to something more jumpin’, and people are starting to relax.  “So you’re going down the whole river, huh?” he asks.

“You know the Wapsie River?”

“Yeah, it’s just north of Le Claire; I went by there on my way here.”

“I bought a motor boat from this guy over on the Wapsie.  Dumbass if you ask me.  He made me this motor that he swore was 25% faster than my old one.  And I take these boats out there at two in the morning when the catfishin’ is better.  So I’m out there, ’bout ten miles from my house, and this mother f—er dies on me!  I’m tryin’ to start it and tryin’ to start it, nothing!  So I gotta walk all the way back there through the woods in the mud, just mad as hell.  I go into that mother f—er’s shop the next day just pitchin’ a holy bitch! “You sonuffa bitch, etc. etc…”  So he says to me, ‘I’m gonna fix it,’ and he puts on this new starter that’s a pull starter kinda like a lawn mower…”

I get this damn thing out there at two in the mornin’ and it’s dead nuts again!  ‘Gaaadammit!’ I said.  So I stand up in the boat.  There’s no way I’m walkin’ back again.  And I’m rippin’ on this thing, and rippin’ on this thing; and finally I’m so pissed off that I give it all I’ve got and the fuckin’ thing starts!  It goes out from under me, an’ I’m in the water.  And this thing is circling, goin’ round and round and it’s about to take my head off.  So the first time I duck out of the way and the goddamn thing near takes my arm off.  The propeller…”  He lifts his sleeve up to show me the scar.  “… chopped into my arm and I’m bleedin’ in the water.  The goddamn thing is comin’ around for another pass, so I kick the mother f—er outta the way, and finally I’m able to swim to shore, my goddamn arm bleedin’ all over the place, and TEN FUCKIN’ MILES back to my house!”

Steve is looking at his daughter now.  You can tell he loves her.  He gets up to leave.  He seems so distracted.  “That’s just how Steve is,” my dad says.  He’s just… this isn’t his thing.”

Meg comes over with three different types of cake.  “Ryan, you need to eat; and there are pretty girls here.”

Thank you for the offer of the pretty girls, Meg.  I appreciate it.  Thank you for the cake.  But I must say that the stories are just as nourishing.  Steve starts to tell me his finger story, but he’s rushed off.  I’m left with my step-dad.  “You wanna beer?” he says.

“Yes,” I say looking at Steve.

I go up to Steve one more time.  “Thank you for letting me shoot your gun all those years ago,” I say.

“Hell.  I didn’t even remember that.”

“Well,” he says looking at his feet.  I’ve made him uncomfortable.  This is not two guys bullshittin’.  This is me showing appreciation.  This has become a social situation.  “Just have a safe trip.”  We shake hands one last time and I’m gone.

In the car my dad tells me that Steve and his son were not talking during the wedding.  Maybe they’re too alike, I think.

“I might put some of these stories on my blog,” I told Steve before leaving.

“Go ahead!” he said smiling.  Though not at home in social situations, Steve is at home… being Steve; and whatever comes down the pipe, he’ll not only survive but have a story to tell.