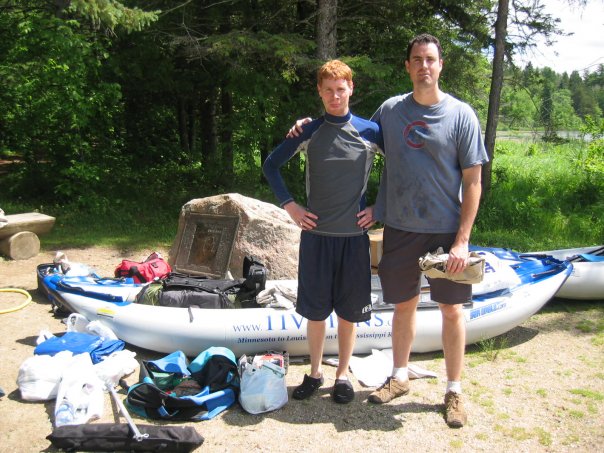 There he is – beady red eyes, disheveled beard, doesn’t this guy sleep?

He sits in front of me and now there is a man, a dude, in front of me where my gear used to be.  I’ve been paddling alone for so long, but now someone cracks and bangs my paddle.  WTF!  This is my stroke!  Now I’ve got to modify my stroke??? Yes, I do.  I must play nice with the neighborhood kid, and his name is Phillip Hullquist.

SMACK!  CRACK!  CLANG! It’s been an hour now and we’re still not syncing our strokes.  We did this at the start of the trip, way up in Minnesota.  Back then we were very vocal about whose fault all this paddle banging nonsense was.

Now we say nothing.  We’re mature now.  We know that our strokes will sync up soon; and, in another hour, it is so – the banging stops.

I was hoping my last stretch of solo paddling would be a bittersweet one.  Ahhhhhh, I am here in front of the St. Louis Arch; it is beautiful.  A gentleman named Kyle helps me patch a hole; a gentleman named Bill helps me pack and asks when I’ll get to New Orleans.  An Asian family gawks and takes pictures.  An elderly man tells me how amazing I am and how amazing this is and how amazing it would be for him to do this but he can’t because (insert stock excuse).  I am happy; I want this to last forever, but I can’t because Phillip is thirsty and says he hasn’t drunk water since 3 o’clock yesterday and I’m taking too long and we have to get going because we need to make New Orleans in 30 days.

It was not to be.  The stretch between the Gateway Arch and where Phillip was camping (just below the I-255 bridge) was harrowing, an absolute washing machine.  Barge traffic is thick, and each barge has its own brand of wake that bangs and ricochets off a narrow concrete-lined channel where your oar hits air here then wave there, you cuss and scream because your boat is being tossed about then to then fro then back and then Jesus this is a madhouse and then this is much worse than Lake Winnibigoshish!   I’m digging my oar into this mess of confused sea, cussing verbally, angry.  “Mother F-ing dashedy dashedy dash!”  The help on the parked barges looks at me like I’m out of my mind.  “I AM out of my mind,” I respond to a fat deckhand though he said nothing to me.

The washing machine is over now, and I’m on my way to Phillip where he’ll suck down Gatorade like a fish gasping for water, and he’ll tell me I’m late, and we’ll try not to argue with one another, and we’ll try to play nice like neighborhood kids should do.

We’ve got to average 35 miles a day to make New Orleans, to make it back to Nashville where The Hitchhiking Movie is showing in a film festival on October 9.  Impossible before the locks and dams.  Entirely doable now.  I pull out the GPS before reaching Phillip.  “Holy Mother of God,” I say aloud.  “I’m gasp going 8.3 miles an hour!”  Im-freaking-possible! I check again.  Holding steadily at 7.5. “Ohhh my god!”  If you didn’t know, my average speed (without a headwind) was around 4 mph in the locks-and-dams portion of the Mississippi.  Now, it seemed, Phil and I would be able to hold 7 without much trouble.  I was ecstatic.

After Phil downed his Gatorade (thanks, Kyle!) and seemed rather impressed with my ability to pack a boat (hell, I’ve only been at this for the last 6 weeks), I could see he was happy to be back on the river.  “It’s like she was a little girl in pig-tails,” he said, “and now she’s all grown up.”

The River is Life and It must grow like all else.

The paddles bang and clack, we adjust.

Phil moves his seat straight back, my feet are cramped, we adjust.

The river grows from a little girl to a big raging hag with three kids, we adjust.

Phil is back, I must adjust.

I’m happy until he criticizes the condition of the water-tight camera housing.  “It’s all scratched up,” he forlorns.  That’s life, I think.  “I’m sorry,” I say.  I know life is also keeping relationships solid, on an even keel.  He is my new bedfellow, my new kayakfellow.  He’s here; life has changed as the river has changed; and now two men are flowing down the river instead of one.  Two men are making decisions.  Two men are deciding when to eat, when to stop, when to go, who to talk to and why.

What other changes will come?  Who will decide what?  When?

We didn’t expect for me to have to do the Middle Mississippi alone; I did.

Part of me wasn’t expecting Phillip to return; he did.

We adjusted; we had to; the river was life, and the only way to end that life was not to adjust.

Phillip says, “You seem much more comfortable with the wear and tear on the gear than I am.”

I want to defend why the gear is worn and torn and say, “I think it is part of life, part of being on the river, but yes I don’t take care of things as well as you probably do.”

He offers a half-smile.  This is sufficient for now – a morsel of honesty, a candy-coated apology.

We laugh and make Miley Cyrus jokes and Wes Herndon (hey, Wes! comin’ your way!) jokes and curse and talk loudly and comment that the barge spotlight looks like the Eye of Mordor, ha ha ha ha ha.

And it is good.  We are safe in our tents – two men, two sets of decisions… one goal.  The River is Life and now we are one in that life, together in one boat, on our way to the point where we won’t have to adjust anymore.