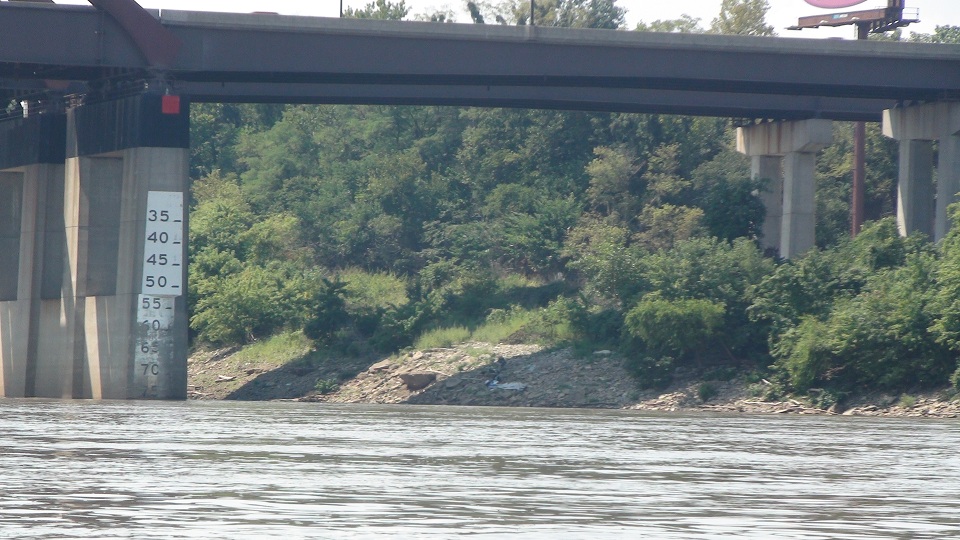 Bridge engineers create flexible gaps in their bridge design so that the roadway can expand and contract slightly depending on the conditions. On the actual road surface, a metal plate is placed over the gap which makes a clanging sound every time a vehicle goes over it. I’ve been listening to these clanging sounds for several hours now and I try and sleep below the bridge. On one side of me is a rock face about 30 feet tall and on the other side are the concrete bridge supports making a sort of drum effect. Because I can’t sleep from the insane amount of noise, I begin trying to count what type of vehicles are driving overhead. Semi trucks make a triple-clang as the first three axles strike the plate above and then two more clangs as the trailer axles strike the same plate. I’ve already determined that many more semi trucks travel on the 255 beltway at night than just regular cars which make the standard “double-clang.”

The only other sound I can hear is the chirping of crickets which is obviously softer, so I try and focus on it instead of the roadway above. This strategy doesn’t work either. I try playing the “What If” game: What if they shut down the highway above and the only sound I could hear was Viva la Vida playing softly in the distance? What if the sounds of the cars began playing in a more predictable manner and the rhythm soothed me to sleep? The game ended quickly as my mind jumped focus to another discomfort–I’m sleeping (well, trying to) on a sloping pile of rocks! How can we make something positive out of this? Hmmm, well, Jesus had only a rock for his pillow so maybe it will work for me too. But 3 hours of non-sleep had already proved otherwise. I got up out of the tent and tried to restructure the platform of rocks underneath me to try and make them more comfortable. No luck! I couldn’t follow Jesus’ example in this case. While outside the tent, I heard a barge going underneath the bridge. I couldn’t see it yet, but it sounded large. The entire character of the river has changed so much since I left it in Minnesota. Way back then it was more like a little girl still in pink-tails. Now it’s all grown up (I’ll resist the urge to do fat jokes here!).

You’re probably wondering what I’m doing in South St. Louis camping underneath a busy bridge. Well, I’ve headed out back to the Mississippi River to rejoin Ryan in our quest to reach New Orleans alive. After several delays and false starts, I finally got a ride with a fellow named Danny. He saw my ad asking for a ride on Craigslist and gave me a call. “So when exactly can you get me to St. Louis?” I asked him. “Well, man, I gotta go see a few friends tomorrow and get something to eat too, but I’ll call you when I’m ready,” he responded. Danny didn’t seem to have a fixed schedule in mind. I liked that about him, but in this case I was trying to get to St. Louis before Ryan got city fever from waiting for me and went berzerk! Danny picked me up in his white VW van on Wednesday. I was rushing around quickly trying to pack everything while his demeanor was much calmer. Danny had a yellow trike strapped to the roof of the Volkswagen which he later told me he was taking out to California for someone else he met on Craigslist. I practically live on Craigslist myself so I figured we’d have a lot to talk about during the long drive to St. Louis.

Danny was quite the adventurer himself. He told me how he’s set up several various businesses to keep him funded while he follows “The Dead” band on tour around the country. I noted he was a musician himself after spying the guitar in the back of the hippy RV. Danny has already been across the entire country once this year already. I silently wished I could travel as much as he has, but suspected he may have also felt the same about me after listening to my stories from the Mississippi River. Sometime after dark Danny dropped me off at the side of the river and I hiked down into the ravine to setup camp by the river. After taking the first load down, I told him I’d be fine and the taillights from his van disappeared into the distance. Actually, I wasn’t quite fine… I had to carry over 100 lbs of gear down a 30 foot steep rock wall which took nearly an hour in the dark. Then I set up camp on this very spot now dubbed “World’s Worst Campsite.”

It was now after 1 am so I left the riverfront and returned to my tent try and get some sleep. Ryan was camping himself several miles up river and he would paddle down and meet me in the morning. I tossed and turned for awhile and feel into a fitful sleep. HOOOOONNNNNNNNNKKK!!! The blaring horn from a train only 20 feet awoke me in a state of terror! Where am I? What’s happening to me? Am I going to die??? When you’re sleeping by yourself in a big unknown city, it’s very disorienting to awake in this manner. I forgot about the train tracks I had carried all my gear across only 5 hours earlier. The train engineer will never know that he had woken a lone camper just trying to get some rest before a long day of paddling. I heard several more trains pass during the early morning hours. At only 6am, I finally took down the tent and awaited Ryan’s call.

Ryan said he would call around 9am so it was a long 3 hour wait before he would even begin to arrive. I looked through my suitcases and located some books I had intended to read when I was last on the river. None of the three had yet been started. I began reading “How to Win Friends and Influence People.” Maybe this will help in the weeks ahead so Ryan and I don’t kill each other! I got through several chapters before the phone rang. “Phillip? I just woke up so it will take me about an hour and a half to get down there,” Ryan told me. I figured it would take him longer, but didn’t say anything at the time. Ryan called several more times during the morning and didn’t actually arrive until around noontime. I figured he’d be late. Perhaps I was causing him to be late by assuming such. But I didn’t care today. Today would be my first day back on the river. A day filled with new sights, new pain, new people, new sunburns, and new memories.

One thought on “Boats, Trains, and Automobiles”