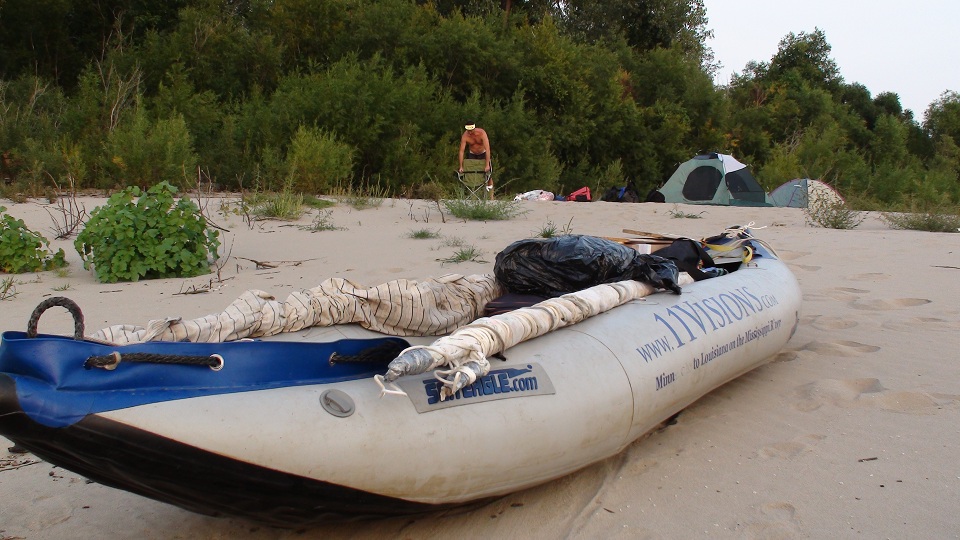 Phillip has made another snide comment about my shortcomings and I’ve had it.  “You have something you want to say to me, you say it to my face,” I say.

“No, no, you’re not getting away that easily; I’m tired of the comments under the breath, the implications, the innuendoes:  You wanna say something?  You go ahead and say it, cuz, buddy, that’s it!”

“Okay,” he says, “you’re not careful with things.”

“We’re still bringing that shit up?”

“So you’re saying that if you had been here that never would have happened?”

“Well, guess what, buddy?  YOU WEREN’T HERE!  You gave me the equipment and took off!  I did the best I could with what I had, what I knew and what you gave me.”

“You can’t prove it because you like to sit there in your high-and-mighty chair and say ‘Duh, if I had been there, duh boat wouldn’t have flipped.’  ‘Course you’ll never say that to me directly, will you?  You’ll just make your damn comments!”

“I didn’t bail on the trip,” Phillip says looking down.

I’ve hurt him.  I’m mad about his if-I-had-been-here-this-wouldn’t-have-happened BS, but that was unfair.  I change tactics.  I try to focus on where we go from here.

“Look,” I say, “we’re going to have a difference of opinion on whether or not X would have happened if you had been here, but you weren’t here, so it’s not fair to recriminate from afar.”

“I’ll agree that I could have been more careful with your camera case and the Flip, but with what I knew, with what you gave me at the time in terms of training and instructions, that’s what I did, so it’s not fair for you to keep on with your ‘should haves,’ ‘should haves’ and more ‘should haves’.”

“If you have something to say,” I continue, trying to lower my heart rate, “say it directly.  No more snide comments, side comments, indirectness.”

“Okay.  Will you be more careful with things?”

We have it out for another twenty minutes after he challenges my common sense.  Then we say that we are sorry, that we’ll agree that each other’s point of view is not necessarily the correct one and that this is stupid. We have not fought significantly for three days since… going on four.

Phil’s ex-roommate, Wes, drops us off in Tunica, Mississippi.  He’s trying to get me to admit that his girlfriend, whom he has brought with him, is hot.

“Jessica,” I say in Spanish, “you are going out with the biggest buffoon in Memphis.”  She laughs, we pack the boats, we move on.

“And the rains came.” – Unknown

And they did.  I had never had more than two consecutive days of rain on the Mississippi.  Past Tunica we have had rain every day – rain in the morning, evening, night.  Rain when it’s time to set up camp, rain when it’s time to tear down.  Rain when we’re eating, rain when we’re sleeping.  Thinking – rain.  Breathing – rain.  As I type this – rain, rain, rain.

“Thank you, God,” I said yesterday going to sleep, “thank you for the rain.  The rain waters the crops which I eat.  Thank you.  But for the love of God, let up sometimes!” I looked into the Sky and laughed hoping… He got the joke.

Past Memphis, it is Podunk.  There is nothing.  One town every three days.  No cell reception.  No internet.  No nothin’.  We have a 15% signal off our Virgin Mobile Broadband right where I sit.  If I move two inches to the left – no signal.

A black man pulls up, a park ranger.  “I’m s’posed to charge ya for stayin’ here.”

“Oh, we’re not stayin’ here.  Paddlin’ down the Mississippi.”

“Humph!” he says with a wide smile, “third group this year!  Last guys gave up right at the spot y’all standin’ in.  Said they was hitchhikin’ home; y’all hitchhikin’ home?”

A challenge he has given me.  A challenge behind a wide, loving smile.

“No sir,” I say and smile back.  He smiles even wider.

“Gooood,” he says.  “Y’all didn’t seem like the quittin’ type.”  He’s carting around a member of the Mississippi Convict Labor Force in his truck.  A white boy – city labor done by the city jail.  He turns to him.  “Told ya, din’ I?  Told you they was paddlin’.  Now look,” he says to me.  “You ain’t s’posed to camp here lest I charge you 15 bucks.  But I can’t be ev’rywhere at once if you know what I mean.”  He winks at the convict.

One thought on “Phil and I Have it Out, For Real”