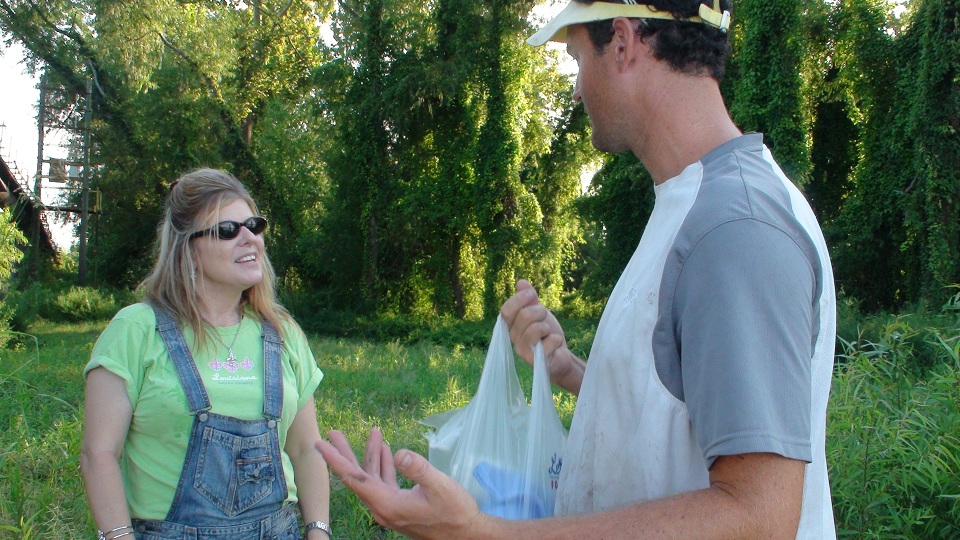 The End Game – Part I

It was wondrous:  dolphins dancing in the sand, feeding on freshwater fish the Mighty Miss’sippi had brought them.  Jeff Johnson, the man who agreed to put us up for a few days, was in his boat deftly handling the camera and steering wheel at the same time.  A strange elation, a strange joy – first in my solar plexus, then whole body… wondrous.

How Does One End Something?

First there must be a pre-end.  Something came before the end.  What came before? I think to myself.  How did we go from there to here?

Ships, giant mother-of-god ships.  “Holy shit!”  I have gone through this process before. The first time I encountered a barge in my life was on the Cumberland River preparing for this trip.  We said to ourselves, “If we can paddle the Cumberland, we can paddle the Miss’sippi.”  We were wrong, and right, in part.  The Cumberland throws you a barge, a single container.  She is big, yes, but only one container long and wide; sometimes two are pushed… but no more.  Two containers pushed by a lonely tug.  “Oh my god,” I first thought, “there’s not a way in hell we can handle these; they’re massive.”  Life disagreed, the River disagreed and threw us more.

My first encounter with barges on the Mississippi:  three containers wide, five deep.  “Holy shit!” x 15.  I was out of my mind with despair in Prescott, WI.  “There is no way I can handle these,” I thought, but then I got over it and got past the locks and dams. I’m in St. Louis now.  There are no restrictions:  “I am a barge captain, I can stack my containers as wide and deep as I like… I have no locks to push them through.  If I feel skilled I could pack them with only an inch on either side of the channel to spare; I can also pack them as deep as I want – 7, 8, 9, more.  I can do this.  I am a captain.”

Forty-two barges on a single load we counted.  Many thirty-sixes, several twenties… no fifteens.  Fifteens are babies now. “I can handle anything you throw at me, Miss’sippi,” I said aloud.  “You will keep getting bigger until I stop getting scared.  I am no longer scared.  Throw what you will at me.”

Barges can get wider, they can get deeper.  They cannot get taller.  Ships can.  They can get much taller.  “Ten stories – that’s one-hundred feet,” Phillip said the first time we saw one of these behemoths.  The Cajuns south of Baton Rouge held their catfish sucking air and shouted and whooped and said we’d be swamped (in jest, I think).  We pushed on.  What else were we to do?  Stop?  No.  The Gulf.  Ever the Gulf, taunting.

“Which way do you want to go?” Phil asked in response to the fear of the ship.

“I don’t know, I’ve never handled these ships before.”

We were arguing over who knew what to do least.

Phil and I worked out a system:  hide.  Go to where that ship cannot.  “Do you see that anchor point over there?”

“Go to it, paddle behind it.  If he wants to run us down he’ll have to skip over that concrete slab.”

Now we argued over who knew the most.  I was comfortable with this argument; even if I lost, I won.

We were able to dodge ships now.  (Barges were babies; forty-twos were nothing.)  We felt immense.  They would come barreling down the channel at 45 mph, and I would feel no sense of worry.  Very liberating.  Phil would implore me to move closer to shore, and he was probably right most of the time.  Though I wouldn’t have died, he did save me from close calls.  Thank you, Phil.

Deftly, ever deftly, we were able to shield ourselves from headwinds; navigate between that barge, that USACE unit, that ship and that dock; glide past the big corporate chemical conglomerates’ docks:  Monsanto, adios; Chevron, good-bye; and Bunge, see ya later.  We were men now.  In the thick of industry, we were men in inflatable boats.

Where Were the People?

The people were finding us.  Barges waved us over with arms and lights and fog horns.  Doctor Peppers were given along with macaroni and cheese and pork and beans and Gatorade.  ‘Good job!’s were given along with ‘how long you think till the gulf?’s and ‘man, I been a barge captain for 25 years and gotta give y’all credit’s.  We were feeling good and riding high.  We knew how to do this:  you just… go.

We were hooking up to McDonalds’ outlets with our laptops and GPSs and cell phones.  We were writing posts with creative flare.  We were buying economic pizzas and cooking beans and instant potatoes.  No day was easy, but we knew how to do it now.  The Mississippi had reared us from single barge to ocean-going ship.  It had reared us from stuff falling off the side of the supply boat to impeccable packing and strapping.  “Nothing has fallen off the side of the boat since Lake Pepin,” I told Phil.  “Humph,” he responded but knew I was right.  Impeccable.  The River was trying to rear us, bear us, and we were born.  Hard love it was, but rear us it did.

People came in the form of reporters and short interactions with barge captains and snide teenagers on the banks:  “Does the coast guard give you a hard time for being out here?”

“This is still a recreational channel,” I told the young’n.

“Yeah, but nobody does it.”

“We do,” I said pointing to my head and Phillip’s.

“Yeah, but…”  Teen was angry to be wrong and whooped a weird whoop to end the conversation.  He made fun of me under his breath to his tanned girlfriend.  I wanted to say, “Say it to my face,” but what would be the point?  We were on the river, we were almost done.  People expressed their incredulity with mocks, with disbelief, with “ooooohhh buddy, y’all got duh life, don’t ya?”  They did it with surprise and with anger (Phillip got a door slammed in his face when he asked for water.  Ha!).  New Orleans was in view, and we were almost done.

Pre-New Orleans, the gap between Louisiana’s two biggest cities, was just a slide down the kiddie slide.  It happened so quick.  But there was one bump, a joyous one before the kicker into the sand – Donaldsonville.  Phil and I walked in tired and angry and hot and hungry.  “You go to the library,” I said.  “I gotta fill my medication.”  On the way to the pharmacy (the GPS says there’s one so there is), I see the painting of an austere Indian on a pane window.  The lettering underneath says THE CHIEF.  I have no idea why I do this when my brain chemistry is screaming for Cymbalta, but I walk into the local paper.  “Oh my god, hi!  I saw you on the news,” the secretary says.  “Oh I’d like to do a story on you,” the editor says.  “Y’all want some Po’ Boys?” the only reporter says because “you can’t leave Donalsonville without tryin’ a Po’ Boy.”  “I’ll drive you to Wal Mart pharmacy,” the editor also says and “I’ll put you in touch with the Advocate [Baton Rouge’s paper].”  Good things happen when you’re wandering, I think.  Very good things.

Leaving Donaldsonville, a group of kids runs us down, their mother in tow.  “Maaaaam, maaaam, dese ah duh guys!  I saw ‘em on TV, and heah dey ah!”  The mother has no idea who we are, and I always feel wary of parents’ concerns for their children when I, as I will continue to be as long as I do these adventures, am the stranger.  “Howdy, ma’am,” I say Texan.  “We’re paddling the river, and’ll be on our way now.”

“Maaaameeeeeee!” Little Boy says, “I tol’ you I’d go to the river every day till I saw deum, an’ I dee-uhd!”

Mom is happy but wary.  (They’re always wary.)  We walk off as if we don’t need them, but I do… need them.  Jugs of water are punching through the cheap garbage bag I brought into town to fill up.  “Weeeeeeeuhl help you carry the-um!”  Kids are scrapping up jugs and trinkets and laptops.  “Weeeee’ll carry them, weeee’ll carry them.” They accompany us to our boats (right past the old oil pipeline, it doesn’t work anymore).  I keep walking, I cannot ask Mom for anything.  I cannot turn around.  They need to offer; I won’t ask.  I won’t be a vagrant, asking, with my hand out, wanting, needing.  You want me?  You ask me.

Mom is coming around now.  She sees the boats, she believes the children (“By god, they were on the news… maybe.”).  We get in to leave and she stops us.  She wants me now; now this is different.  “Wait!” she says.  “Don’t leave!  You gotta tell me about this journey.”  We give her the short version and get in to leave.  “No!” she says and “hold on” and “um, can I give y’all something?” and “I wish… I just wish I could give y’all something for the… for the…”

I say thank you and your boys are great and look for us in The Chief.  Then, off-hand, because I love them, I comment on her Fleur de Lis necklace.  It’s stunning.  Real diamonds, I hope.  The beautiful, beautiful Fleur de Lis.

Part II coming in 48 hours!  We are in Oak Ridge, TN where we’ve just seen The Hitchhiking Movie on the big screen!!!!  We didn’t have huge DVD sales afterwards, but 1 out of 3 people who saw the movie bought the DVD – awesome!  In the next post, New Orleans, New Beginnings, Katrina becomes important, destitution becomes important and the wiping out of things – beginnings.  More ships will come… of course.  Headwinds, difficulty and Jeff Johnson… of course.  A rowdy romp at a barge captain bar.  The end is near.  Hang on till the ride is over.  And to answer some of you fans, OF COURSE WE GOT MORE ADVENTURES COMING!

One thought on “The End Game – Part I”