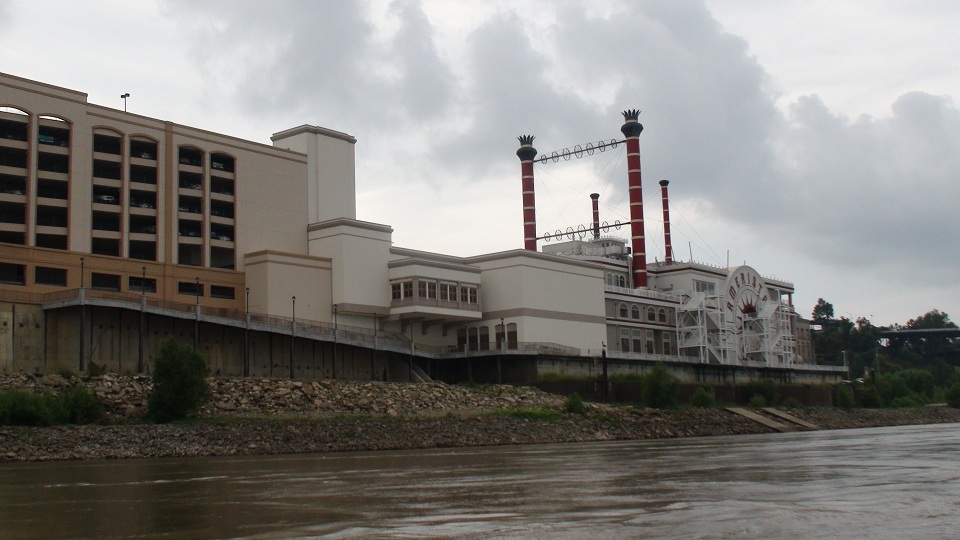 It’s a strangely familiar setting–standing by the side of the road with some camping gear beside me and a large pack on my back filled with supplies. I’m in Vicksburg, Mississippi and there seems to be no other solution right now other than to start hitchhiking. You’re probably thinking that I’ve had it with Ryan, the paddling, and the rain, and have decided to hitchhike back to Nashville. You’d be wrong…

Two hours earlier, Ryan and I split up in Vicksburg so he could work on the blog while I did some much-needed shopping. Walmart is only a mile from the river, but the guides at the welcome center pointed out a route that didn’t involve walking illegally down the interstate. The new route took two miles so I brought along Ryan’s giant pack so that I would be able to carry everything back should there not be effective public transportation. Once in the store I went crazy and bought nearly tons of food (I was hungry after walking the two miles!) and already knew there was a bus which could take me back to the casino.

Beep. Beep. Beep. The young woman at the checkout stared downward while I made small-talk about the change to white packaging in Walmart’s “Great Value” product line. I then asked about the N-Route (Vickburg’s bus) schedule. She didn’t know the times, but left mid-checkout to ask someone who did. She returned in a moment with the answer:

“The N-Route comes by every hour.”

“What time is the next bus?”

“What time is it right now?”

“Are they usually on time?”

“What about a taxi?”

“Don’t have any in this town anymore.”

Damn it! I began adding up the weight of the food already bagged and in the cart. There has got to be at least 100 pounds of food in that cart. How the hell will I carry all that back to the boat? I walk out the front door and ask an employee on break if the bus has arrived yet. “Just left 5 minutes ago,” she cheerfully responds. Okay, then. Let’s load up this pack and walk it back. Ryan had showed me some of the features of his Gregory pack just before splitting and I’m glad now that I was listening to him. I extend the buckles outward so that it can hold the maximum amount of gear. All the food goes into the pack save only the bread and powered milk which I worried will get crushed and damaged.

As I walk out to the road, a tan Oldsmobile car which has seen better days slows down as it enters the parking lot. The rear window rolls down as it parks and a young black boy gestures to me with his hand. “Mister, mister!” I turn and look back at him and him and his brother as they exit the rear seat. “Do you want some food?” he asks and hands me a big box of donuts. I already have 100 pounds of food. What I need is a ride! “They’re fresh!” The boy’s shrill voice breaks my line of thought. I mumble a genuine thank you and feel the sugar rush after only one bite. “I really need a ride back to the casino,” I volunteer, but the boy just grabs his father’s hand and skips into the store. I imagine they thought I was a homeless man and they were helping me get something to eat for the day.

I’m already exhausted after barely walking out of the parking lot and decide to try a old trick–hitchhiking. So that’s why I’m out here on the side of the road with my thumb out. 30 minutes pass slowly with no results. Ryan’s gonna be wondering where I am. I was supposed to call him when I left Walmart so we could meet at the boats. That could be hours from now though if I have to walk the entire way. I put the pack back on and walk about a half mile to a better spot on the highway. Another 20 minutes pass with no luck. After walking awhile longer, I can’t take it anymore and stash the goods under a tree on the side of the highway. There has to be another solution. Now free of the pack I walk unencumbered to a Shell station near the casino. Three female clerks tell me they know a guy to call for a ride and one of them makes the call while the others watch in amazement as I guzzle down two large bottles of Gatorade.

An unmarked Town Car pulls up beside the Shell station chauffeured by a driver who bears a resemblance to Morgan Freeman. God himself came to rescue me, I think as I cautiously ask: “Are you the cab driver?” The man responds softly without making eye contact, “You could say that.” I get in the car and describe my situation. He listens quietly and pulls out to the road asking only, “Which way?” We drive in silence and pick up the bags from my not-so-secret hiding spot. I ventured a question which finally got the God look-alike talking:

“How long have you lived in this town?”

“You don’t want to know the answer to that question, but I spent 50 years on the road as a truck driver.”

This line of questioning seemed like a dead end, but then “God” continued.

“This town used to be jumpin’–it was like Vegas back in the day.”

“When was it jumpin?” I questioned using his same manner of speaking.

“Oh, that was probly before you was born.”

We were almost back to the casino before he made a new observation:

“Well, I guess I better not get in fight with you ’cause you could prob’ly kick my ass.”

I laughed awkwardly and he quickly followed up with, “Don’t get upset, I just jokin’ with ya.”

It’s nearly dark as I unload the gear from the trunk on his car and I already spot Ryan down near the boats. “God” got me back to the river and hopefully God will get us both safely all the way to New Orleans.